Culture at the Market

mankind and one of the single most significant trademarks of a culture," wrote Mark Kurlansky in Choice Cuts. Food reflects the cultural influences in a community. Scotty’s breakfast sandwich, Juan and Maria’s empanadas, Manuela Noble‘s tacos, and The Pirogi Guy’s variety of pirogies reflect Southern, Latin American, Mexican, and East European cultural influences in Rochester at its Public Market. 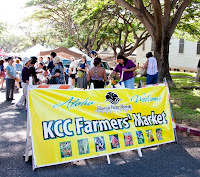 Poke is the Hawaiian name for cubed fresh fish (often ahi which is tuna) seasoned with a variety of ingredients such as green and white onion, limu (seaweed), sesame oil, 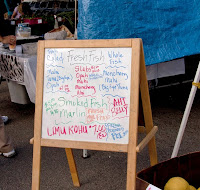 kukui nut, sea salt, ginger, soy sauce—usually not all at the same time!

Spam musubi is the Hawaiian version of a Japanese rice ball topped with a slice of fried Spam and wrapped with a sheet of nori, the toasted seaweed used for sushi rolls.

Fried rice is a Chinese version of rice sautéed with onion, shrimp or other meats, vegetables and often seasoned with soy sauce or oyster sauce.

The KCC market is a connoisseur’s as well as an epicure’s delight of colors, smells, and tastes, reflect the

many cultural influences in the islands

The KCC Market is under the auspices of the Hawaii Farm Bureau Federation. It is open on Saturdays from 7:30 – 11:00, on the Kapiolani Community College campus.

“The Hawaii Farm Bureau Federation (HFBF) is a non-profit organization of farming families united for the purpose of analyzing problems and formulating action to ensure the future of agriculture thereby promoting the well-being of farming and the State's economy.

Posted by margaret miyake photo at 11:34 AM