Sap is rising. The nights are cold. The days are above freezing. It's the perfect time to head to the sugar bush and collect sap.  At Oldhome Farm in Walworth, NY, Anita Amsler and her business partner Louie Bell are working day and night collecting, cooking, testing, sampling and bottling maple syrup. I visited Anita and Louie on February 17. "This is the earliest we have ever tapped," says Anita.


For Anita, sugaring is the first sign of spring. “It’s a time of rebirth,” she says. “You go out in the woods with snow up to your knees and know that spring is coming. Things are changing. It’s mud season, which I hate. Sugaring takes us though that time.


“To me it’s magic, seeing little shoots coming up. We have this wonderful earth and we take it for granted. Spring is the very beginning and we’re the fortunate ones. Whether it’s a good season or poor like this year, it’s good to feel part of the earth and the seasons.”


Their sugar bush covers two to three acres. Anita and Louie have been tapping for 16 years. They use the “old-fashion” process: tap, insert spiels and hang buckets with lids. When it’s a cold night, below freezing, and a warm day in the 40s, the sap flows.

Often Anita’s daughter Heidi and son Chad and their children help collect sap. “To watch my grandchildren, talks to my heart,” says Anita. “I watch them put their tongue under a spiel to catch the sweet white sap. This is special and not all children are so fortunate.

“When they were younger, my grand children had fun playing around the trees and once they got lost. Now they tell me ‘We won’t get lost again,’” says Anita. “I’m hoping that one will carry on this tradition. It’s doesn’t need to be a business, but to have syrup for their family. What is most important is the family gets to be together.”


Smoke rises above the sugar house while inside the room is filled with the sweet smell of sap boiling down to syrup. Anita rewards her grandsons with a sample of this season's syrup—a reward for all their work in the sugar bush empting buckets.
Posted by margaret miyake photo at 11:40 AM No comments:

In the middle of February, spring is tantalizingly close, but the month of March often reminds us that winter has not released its grip, yet. The garden at Old Rose Court looks barren at this time of year—ungainly branches rise randomly from the snow.
By early to mid-June, the air is filled with the perfume of roses, many of them heritage roses that only bloom once a season. Reds, pinks, and whites are the predominant colors of these "old roses". Some of the varieties date from the 17th century. 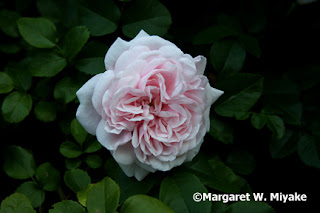 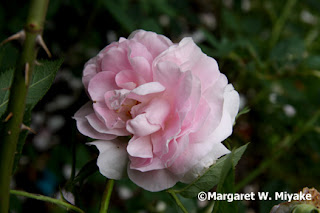 While February often seems the longest month of the year, may Alexander Pope's lines and these photographs of Old Rose Court roses to remind us of another day.
Hope springs eternal in the human breast;
Man never Is, but always To be blest:
The soul, uneasy and confin'd from home,
Rests and expatiates in a life to come.
– Alexander Pope, An Essay on Man

Posted by margaret miyake photo at 12:25 PM No comments: