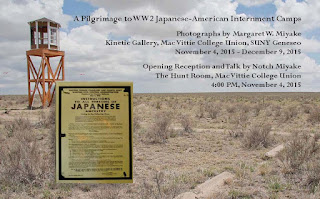 Two months after Japan attacked Pearl Harbor, 120,000 Americans of Japanese ancestry living on the West Coast were forcibly removed from their homes and imprisoned in ten concentration camps located in remote and desolate parts of the country.

Seventy years after the last camp closed, Notch and Margaret Miyake travelled to all of them to honor the sacrifices of the internees and to learn from their experience. They have produced an exhibit documenting their journey and raising issues that are increasingly relevant as the nation struggles to respond to terrorism and illegal immigration:

Posted by margaret miyake photo at 9:17 AM