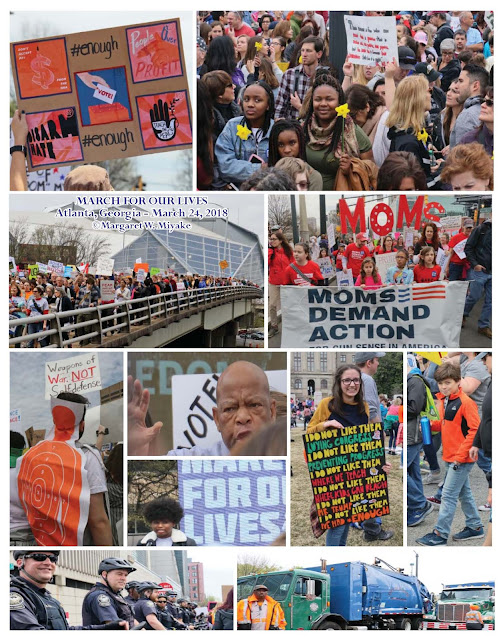 MARCH FOR OUR LIVES, organized by the young whose lives are most affected by gun violence in schools, on streets and in neighborhoods, drew more than 30,000 protesters in Atlanta, Georgia, to support them. I joined the march to photograph and protest, walk with my daughter-in-law and grandson who participated in his first protest march.

A "sea of posters" expressed why we marched:
Books not Bullets;
Arms are for Hugging;
VOTE;
Kids Shouldn't Fear School;
Enough-Support Gun Control;
MOMS DEMAND ACTION;
Protest brings Change-Change brings Progress;
VOTE;
Actually Guns Do Kill People;
MARCH FOR OUR LIVES;
My Fear isn't Finals, Guns Are;
Why are Guns more Important than Our Kids?
NOT ONE MORE;
Disarm Hate;
Black Lives Matter;
VOTE;
End White Supremacy;
Only Thing Easier to Buy than a Gun, is a GOP Candidate;
Arms are for Caring, Not Killing;
VOTE

School safety is not a political issue. There cannot be two sides to doing everything in our power to ensure the lives and futures of children who are at risk of dying


when they should be learning, playing, and growing.

The mission and focus of March For Our Lives is to demand that a comprehensive and effective bill be immediately brought before Congress to address these gun issues. No special interest group, no political agenda is more critical than timely passage of legislation to effectively address the gun violence issues that are rampant in our country.

Every kid in this country now goes to school wondering if this day might be their last. We live in fear." Hosted by March For Our Lives - Atlanta and Georgia Alliance for Social Justice


Posted by margaret miyake photo at 12:22 PM No comments: